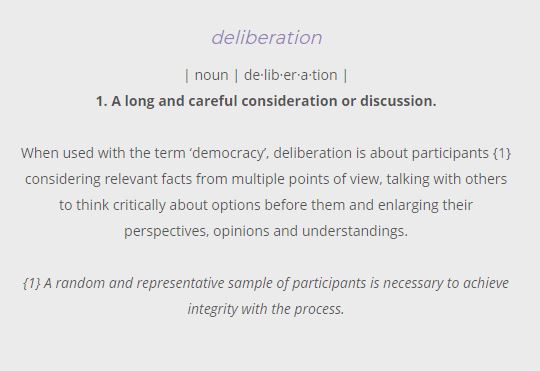 Me and Claire went to the Innovating Local Democracy conference in Manchester on 27th and 28th January at the People’s History Museum (fantastic place, visit if you’re nearby!). The conference focused on how deliberative and participatory democracy can benefit local democracy in the UK. And, as befitting a conference of that name, there were many opportunities for us to shape conference sessions. It was very democratic! And, given the national, global, political background to our lives, it was a real breath of fresh air, inspirataional, actually – there was such a spirit of hope and optimism in the air and a willingness to share and to engage in new thinking.

We essentially went along in order to understand more about new-to-us innovations such as Citizen’s Assemblies, People’s Assemblies, Citizen’s Juries – different names for a single overall purpose: creating an environment where all humans can experience power and agency themselves in order to help communities flourish. So, this process has only just begun for us here on the East Marsh of Grimsby.

I would guess that most participants there were from councils of some description (it was aimed at local authorities), but there were some amazing practitioners present and if you look at Wikipedia’s entry on Citizen’s Assembly, you will see mention of examples of such processes from British Columbia, Ontario and Poland – the people behind each of these were there and generously sharing their experience and their learnings. And our proposed model will likely have a different flavour to many of these – but we’re just starting our learning journey here, so we’ll see…

The break-out workshops were a radical change from other conferences I’ve been to, where one speaker talks and all the other people in the room listen – the ‘unconferences’ were facilitated very adeptly by engaged and engaging people and hinged around a conference-generated question which was addressed by everybody in the room – a genuine pooling of experience and knowledge, which was exciting and engaging.

There’s a great write-up of the conference from Cllr Lillian Burns, from Prestbury Parish Council and some amazing organisations behind the event and a great, contextual piece here from The Alternative UK. I shall try and list as many of these organisations as I can here, and add to them as I find more (let me know if I’ve missed any). Too many lovely people to mention here, but great to connect with Mikee from Losing Control and to Rachel from the remarkable Frome Town Council. Many thanks to Lizzie Adams at Involve for spending time on the phone initially and for guiding me to the conference, and to Simon Burall of Involve/Public Square for spending significant time on the phone outlining the different aspects of Citizen’s Assemblies – really appreciated!

Organisations behind or associated with the Innovating Local Democracy Conference: 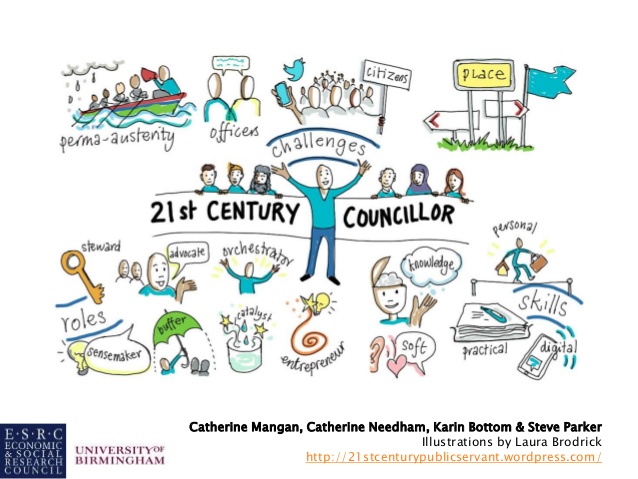 This report was produced by four authors from University of Birmingham and it looks at the roles, skills and values of elected members, and how these are shifting. The research builds on their earlier 21st Century Public Servant research.

Data is drawn from a total of 50 interviews (face-to-face and telephone) and five focus groups (face-to-face), accumulating information from 68 councillors and 18 officers.

The researchers have stored the report in a very accessible format on their blog: https://21stcenturypublicservant.wordpress.com/21st-century-public-servant/21st-century-councillor/

Here you can find not only the Main Report, but also a 4 page summary report, a
Literature review and their ‘Lessons from the Literature’ (which is deserving of attention on its own).

Place Based Social Action and the 21st Century Councillor

In thinking about the social contract the discussion around the changing roles of councillors and how they interact with ‘citizens’ partners and officers is interesting (pp 8-13) and the discussion of ‘Councillors and Place’ especially so (pp 14-16). There is mention of “a more holistic understanding of place including the contribution of other agencies operating in that area”, which is central to our own thinking about our ‘place’.

After reading the report I am left pondering my own lack of knowledge of council structures and would like to have a better understanding of how it all works – what a ‘combined authority’ is, how ‘community commissioning’ works (or doesn’t) etc.

What does this research mean to you?

The writer of the preface calls this report “a call to action for Councillors and organisations to rethink the role of elected members.” What do you think, Dear Reader?

If this report is new to you and you find time to give it a coat of looking at, what do you make of it in your particular context and experience and how does it fit in with the PBSA project?

If you have read or encountered the research previously, what did you make of it then and what difference, if any, has it made to your work context or practice?

Write your thoughts in the comments below or email to me: billydasein@gmail.com